“Ow!” I yelped, as the pick-up truck bounced in and out of another moon-like crater, throwing me smack into the path of the low-hung cork oak bough waiting for me.

“Quick!” shouted Siobhan, utterly unconcerned for my well-being. “Grab the banana! It’s going to fall off!”

This was not how I had pictured the start of my new life. When I had set off from North London some 3 months earlier, I think I had probably imagined surveying the surrounding splendour with a backdrop of a golden sunset melting over the rolling hills, a glass of Alentejano red wine in my hand.

Instead, here I was on the back of my new neighbour’s pick-up truck, bouncing maniacally with every pothole on the sacks of horse manure that cushioned me, desperately clutching a handful of assorted young fruit trees that were to be the pioneers of our planned orchard, whilst simultaneously holding down with a spare foot a rucksack that contained all our belongings.

This was all that we had managed to salvage from the hired jeep that we had set off in, from Lisbon earlier that day – a jeep that was now slowly sinking into a swamp in the deepening gloom, taking with it the last few bubbles of an idyllic vision of our triumphant arrival here in deepest cork country.

Finally, after one last hair-raising bend, the truck shuddered to a stop and the engine fell silent. Gingerly, I stepped off the back end of the vehicle, and looked around, gingerly rubbing my bruised backside.

We had arrived. This, a small traditionally-built cottage perched on top of a hill in the middle of seemingly endless forest, was where we had chosen to make our home. Years of hoping and dreaming – not to mention long overtime hours – had gone into making this moment happen.

And the sight that greeted me was even more spectacular than I could have possibly anticipated. Night had fallen, but over the crest of the furthest hill a full moon had risen – a moon so huge it picked out with excruciating detail every twist of the gnarled trees that smothered the landscape.

There were no city lights and no background roar of traffic on this still and motionless night. Only the distinctive call of a nearby eagle owl interrupted a silence as deep as the sea. That, and then the polite cough of my neighbour who asked me whether I would now like to unload my eclectic belongings from his vehicle.

I looked at António. He had fetched a tiny torch that seemed utterly insignificant, but in the moonlight I could see a broad beam that encircled his face. He was clearly satisfied at my delight. I had only met him once before when I had got completely lost in the forest two weeks before with a jovial young estate agent, and we had ended up on his doorstep to ask directions.

Our timing then had been immaculate. Like almost every home in this region, he had a domed bread-baking oven made of stone outside the house, and when we had turned up on his porch, a fresh batch of hot rolls and traditional sourdough bread was being shovelled out of it on top of a huge, wooden spatula.

“Actually, we haven’t seen the place yet,” I replied. He pointed at the hill across the valley. “It’s just over there.”

I strained to see what he was pointing at. All I could see was thick forest. There was no obvious house.

“You’ll move in. You’ll see”, he added, with his cheeky grin that seemed to be a permanent feature.

António was nearing 70 years of age, and lived with his wife and son in a long toblerone shaped country house. The half-metre thick walls of adobe or rammed earth, coated with a shimmering layer of slaked lime whitewash, stood solid against the fierce hot sun. Long, low-slung beams held up a mosaic of biscuit-coloured baked clay tiles. There seemed to be around a dozen different sizes of tile. This, I learnt, was because around a dozen different men had been involved in the arduous task of moulding the tiles on their thighs. As the thighs of each man varied, so did the tiles.

To the side of his house were several piles of cork, all of them immaculately arranged. The largest was about six feet tall, ten feet deep and fifty feet long. It was like a gigantic three-dimensional honeycomb, a jigsaw puzzle with each cross-section of tree-bark enmeshed perfectly with those around it. This was the top-quality stuff, what the cork buyers paid most money for, and so extra effort was engaged in ensuring it was kept in the ideal conditions whilst it air-dried ready for processing. This was the mainstay of his family’s income, and António – like all the other cork farmers in the region – would carefully supervise the cork strippers who would come to peel his trees and ensure that none were damaged. 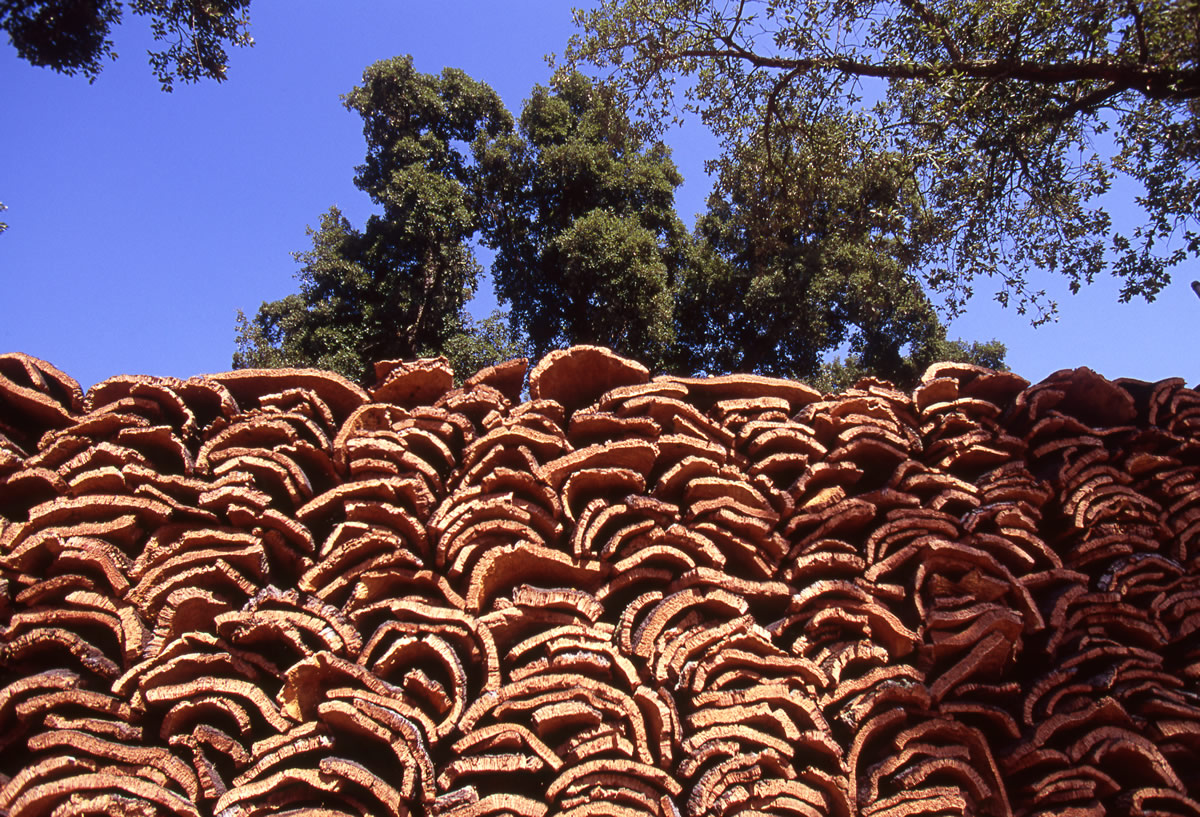 Next to this pile was another, pyramid-shaped and much smaller. The cork here was much grainier, and less uniform. These were the ‘off-cuts’, such as what is taken from the base of the tree, which – António patiently explained – was always stripped and kept separately to be used in insulation, floor tiles, etc. The best quality bark is dedicated to the production of cork stoppers for the finest wines across the world.

A third pile, also pyramid shaped, stood behind it. This was virgin cork, said António. “It’s from the young trees.”

He pointed out the ‘young’ cork oaks springing up amidst the huge twisted trunks down the hillside.

“Some I planted myself, some are the children of the big ones. They are for my grandchild,” he added, winking in the direction of his son, who – as far as I was aware – was still single.

I looked at him. He was being deadly serious. And as he said it, it made perfect sense to me.

“So those oaks over there, the ones you get most of your cork from, how old they are?” I asked.

“My great-grandfather planted those. They are between 80 to 120 years old.”

I nodded. I knew I had just learnt a very important lesson. I had known nothing about cork trees except that they looked beautiful. But to Antonio and his family, it was their whole life.

We bade our farewells, and staggered down to the bottom of the hill in the estate agent’s ex-Portuguese army jeep and drove at snail-like speed until we spotted an opening in the forest signalling the track which, we had been promised, wound its way up the neighbouring hill and to the house that would one day be ours. No-one had been along here for some time – no-one, that is, except for the estate agent who had been here previously to take a photograph of the cottage for the flyer which we had spotted in his front window.

The track was now overgrown with tall rock rose bushes, whose willowy spindles spurted energetically through every crack they could find in the baked clay.

The cottage had lain abandoned for some time, and the whitewash was peeling off the wall exposed to the sun. But this withered into insignificance as we stepped inside to be greeted by a huge open fireplace some four feet high.

A lone hand-made wooden chair with a woven seat sat inside the fireplace. Wooden shutters covered the windows, and cool smooth flagstones the floor. Outside the main entrance was a little terrace, next to which was erected a covered woodstore. As I peered inside, I saw that this also concealed the mouth of the bread-baking oven, and sheltered the wooden spatula and other implements, including gardening tools such as a mattock specially designed for the stony, clay soil. 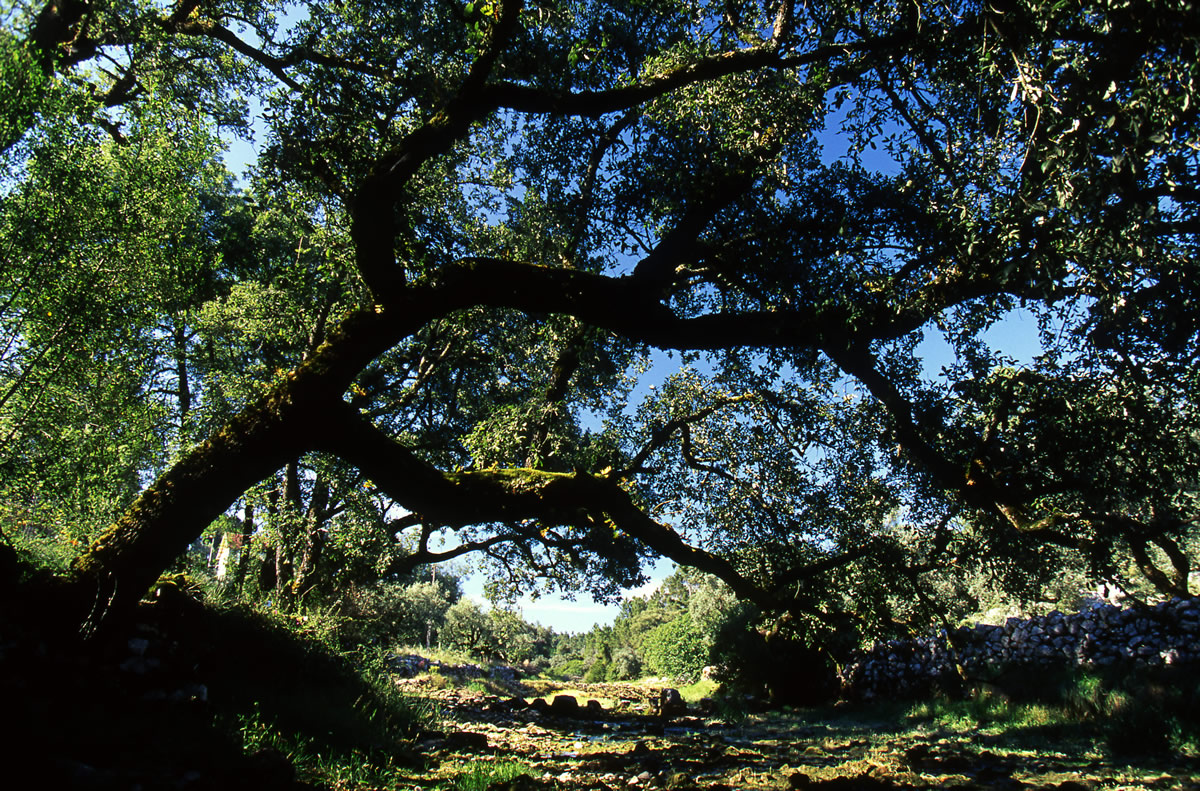 In front of the house was a garden surrounded by a dry stone wall to protect the soil from wind and driving rain. To the other side, an olive grove emerged from the meadow flowers and tumbled gently down the hill and into the thick woods that hid the valley bottom from sight.

I had to go and explore. I raced down the hillside, almost losing my footing as I reached the forest edge. And then I paused and looked back up the hill at the house. The olive trees almost hid it from view.

“There’s a path here”, said Siobhan, who had drawn up beside me. I looked, and there indeed was a narrow footpath that began just the other side of a small clearing next to the border of the woodland.

We parted the wild rock rose bush in front of us, and waded in. The bushes behind us closed. It was as if we had entered another world. Above us, thick branches wound around each other in search of the sky, the dusky grey coating contrasting with the glistening green of lichens and new leaves.

Layer upon layer of shrubs, flowers and mosses carpeted every dimension in every direction. Birds darted around us, warning friends and family against the new intruders. Orchids, wild mushrooms, lavender, heather, gorse and strawberry trees all wrestled for supremacy, and for our attention.

Slowly, we followed the path down to the valley, where we found a natural spring bubbling into a stream that lined the old vegetable garden here. Beneath the brambles we discovered two hand-dug wells that had been dry-lined with slabs of stone.

We were a million miles away from the open hilltop above, let alone London. The soapy smell of Japanese medlar trees swirled in our senses, as did the roar of bees hungrily feasting on the new flowers on offer. Pears, apples, peaches, figs, bay, and unidentified citrus trees were packed together around the grassy opening.

The estate agent had followed us down.

“So, what do you think?” He was almost laughing, so broad was his grin. He knew full well we had fallen in love with it all – the house, the hill, the forest, the garden, our neighbours.

I tried to be business-like. “We’ll have to think about it of course…” I trailed off. It wasn’t very convincing.

That was then, two weeks ago. Now, tonight, would be our first night on the farm, out here in the wilds of the Alentejo. But much like our arrival, it was to be rather different to what we had planned.

Chronicle 2: Strangers in the dark