The designer Ana Mestre studied cork in her PhD and this material is the base of Corque Design, a cork furniture and accessories brand that was set up in 2009. Puf-Fup was the first piece in cork with 2,500 spheres of natural cork trapped on a line of cotton. An object that explores the sensory, visual and tactile potential of this raw material. This was followed by Puf String that comes to life in the form of seat, which explores the elasticity of cork. Ana Mestre also created the Caterpillar with expanded cork and a layer of water-based varnish. The Caterpillar is a spherical seat system which is also an educational item, consisting of single parts that allow numerous compositions. Puf-Fup and the Caterpillar have been on display at MoMA in New York and in Tokyo, and also in Milan, Helsinki, Shanghai and Madrid. The work of Ana Mestre has already been the subject of an article by The New York Times. 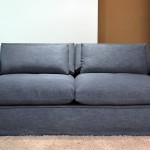 Algodão Doce is a sustainable sofaDecoration