The students of Escola Superior de Artes e Design in Matosinhos were challenged to create cork jewellery  The results were shown in the exhibition “2nd Skin – Cork Jewellery” which was displayed at various locations, including the municipal library of Santa Maria da Feira. Several jewels were incorporated in a flexible material open to any aesthetic trend. This international project with its origin in Portugal was developed in a partnership between the Art and Design College and the DesignLocal cultural association of Santa Maria da Feira. In 2009, when the initiative was disclosed, it was announced that the exhibition would take in several European countries, including Germany, Finland, Estonia, Netherlands and Spain. 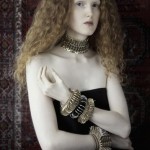