The wooden shutters shuddered before the violent onslaught. Furiously blinking away the sleep from my eyes, I leapt up and removed the wooden pole that served as a lock for the window. I peered out, bracing myself for a storm-induced scene of disaster and mayhem. Instead, a smiling face beamed back at me.

‘Morning neighbour!’. António stood there, shepherd’s crook in hand, with a look of sheer delight as he surveyed my abominably dishevelled form. ‘It’s time to plough your field!’

Still unsure whether this was a dream or a nightmare, I hurried to the front door, attempting to dress and comb my hair as I stumbled across the flagstone floor. António was already there on the terrace as I heaved the heavy wooden door open. Behind him the sun was slowly rising. The mist was beginning to evaporate off the glistening rolling hills behind. Shrill birdsong filled the air, as if to emphasise our wayward urban ways. 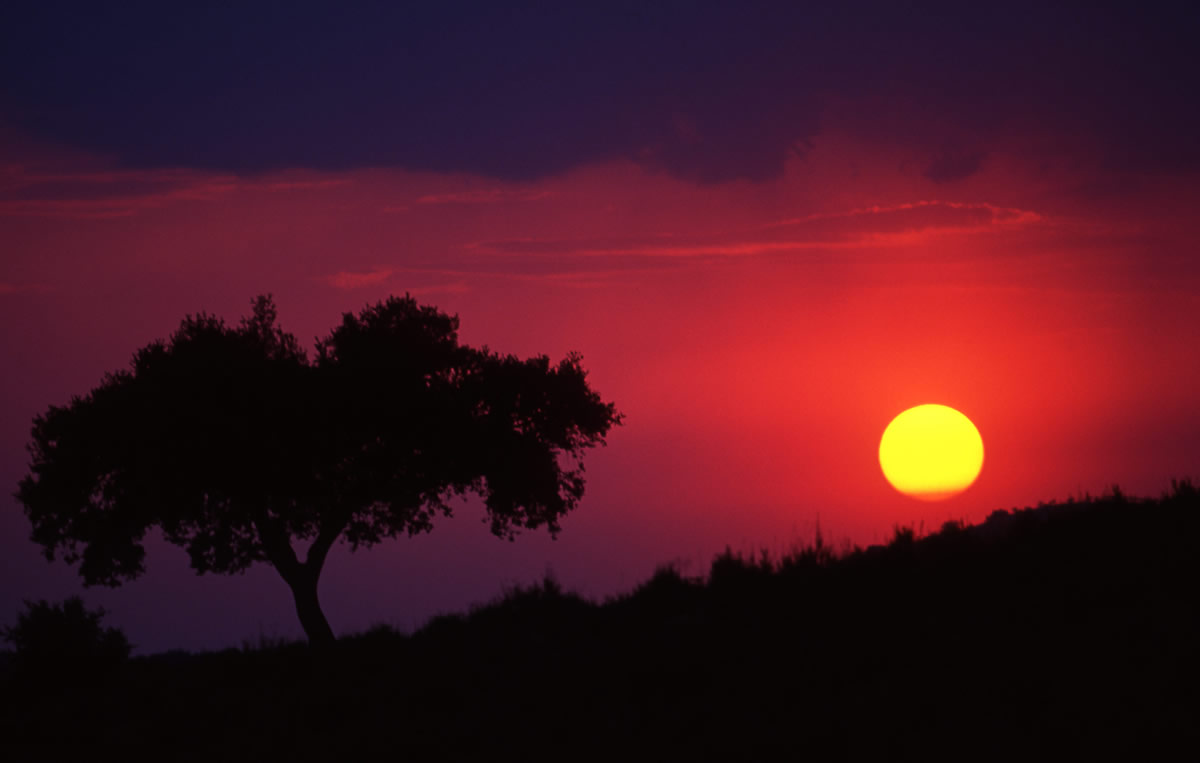 António leant forward and tapped me on the shoulder with his gnarled wooden crook. ‘It’s time you got your summer vegetable garden underway. Move the stones and cut down the rest of the brambles and I’ll be along later.’ With that, he turned away and strolled down the hill, whistling as he went. His dog followed obediently behind, shooting me a glance as he trotted through the bushes. Or was it a mischievous grin?

Siobhan appeared behind me in the kitchen. ‘What did António want?’, she asked, yawning and pulling the bathrobe around her. ‘I think he just offered to plough our field in the valley’, I replied, scratching my head.

‘Oh no,’ I replied. ‘That’s going to take ages.’ I groaned. The valley had been badly flooded during the previous winter’s storms, washing stones of various sizes down the hill and into the old vegetable garden. I had started cutting down some of the brambles that had begun to invade the now-barren field, but had not yet finished.

‘Well, you had best get started. I’m going to have some breakfast’. Siobhan fetched a dome-shaped loaf of sourdough bread and fresh goat’s cheese. The old copper kettle creaked and groaned as the water inside it warmed up.

I sat down on the terrace, still a little shaky from the day’s abrupt beginnings. Above me, the sound of incessant tapping came from the gnarled old cork oak tree in front of the terrace. It was a woodpecker, the same one that came at exactly the same time every day as if it were also taking breakfast. As I got up to take the plates indoors, he vanished in a flash of scarlet, his looping flight taking him deep into the forest and out of our sight.

‘See you later’. I waved to Siobhan and made my way through the forest along the winding path. The heat of the oncoming summer seemed to disappear under the boughs of the cork oak trees, laden with now-vibrant green clumps of leaves. Underneath the thick leaf litter, the earth was a rich dark brown, belying the season’s hot, dry weather.

I reached the secluded garden at the bottom of the hill. The little stream that curved its way around the border had slowed to a trickle, but the spring on the other side continued to overflow, creating a rich patch of grasses in front of it. As I passed alongside, a powerful aroma of mint and wild thyme filled my senses. Then there was a noisy splash as a horde of tiny frogs dove for cover from the oncoming human into the safety of the spring.

The sun was not yet high enough in the sky to penetrate the garden, and there was a cool breeze as I moved the stones and assorted boulders. Just as I was finishing hacking away with the sickle at the last of the brambles which threatened to strangle the assorted peach, loquat and bay trees, a throat cleared itself behind me. I turned around. It was António, his hat cocked at an angle as if to emphasise the cheekiness of his grin.

‘Can I come in?’ he called cheerily, and climbed over the makeshift gate without awaiting an answer. ‘Make sure you look after this gate. You don’t want my donkey coming in and stealing your loquats, do you?’

He chortled at his joke. I had suspected that António had been coming in and helping himself to the tender, yellow plum-like fruits after discovering a tell-tale trail of tiny footprints leading up to the largest of the trees. António had made no attempt to hide his love of my fruit trees after I pointed them out to him after one such raid, even helpfully telling me which ones gave the better-tasting fruits, and I certainly bore him no ill-will. After all, I had more than I could cope with, and he had none. But attempting to solve the secret mystery of the loquat thief had now become part of his repertoire, and he had made me the garden gate himself after solemnly declaring one day that he suspected one of his donkeys could be the culprit.

‘When you’ve finished cutting the brambles, make sure you make a pile of them right in the middle of the garden so that when you burn them you don’t catch any of the trees. I’ll be along when you’re done.’ And having given his instructions, he was off again, leaving a trail of small footprints in the soft earth. The same size as the ones around the loquat trees.

An hour later, the last of the brambles had been burnt. I peered up through the clearing to the top of the opposite hill, where António’s house stood. I knew he would have been monitoring the situation from his vantage point, and now that my tasks had been completed, he would be along shortly. Sure enough, ten minutes later a gentle clanking noise and a murmuring alerted me to the approach of António, his son Carlos and their two huge, russet-coloured oxen, Bonita (Beautiful) and Vermelha (Scarlet). They had been harnessed to a single furrowed plough.

With work to be done, greetings were short and the plough was fixed firmly into place. With each pass, the unyielding hard ground was turned into rich, malleable soil. I could almost begin to envisage the crops that would thrive here with the help of the ample water from the spring and two stonewalled wells.

Carlos encouraged the oxen along whilst António steered the plough behind, expertly turning it and switching the angle with the aid of a rope at each end, and occasionally – although I could not be sure – cussing me for omitting to remove a buried stone here and there. 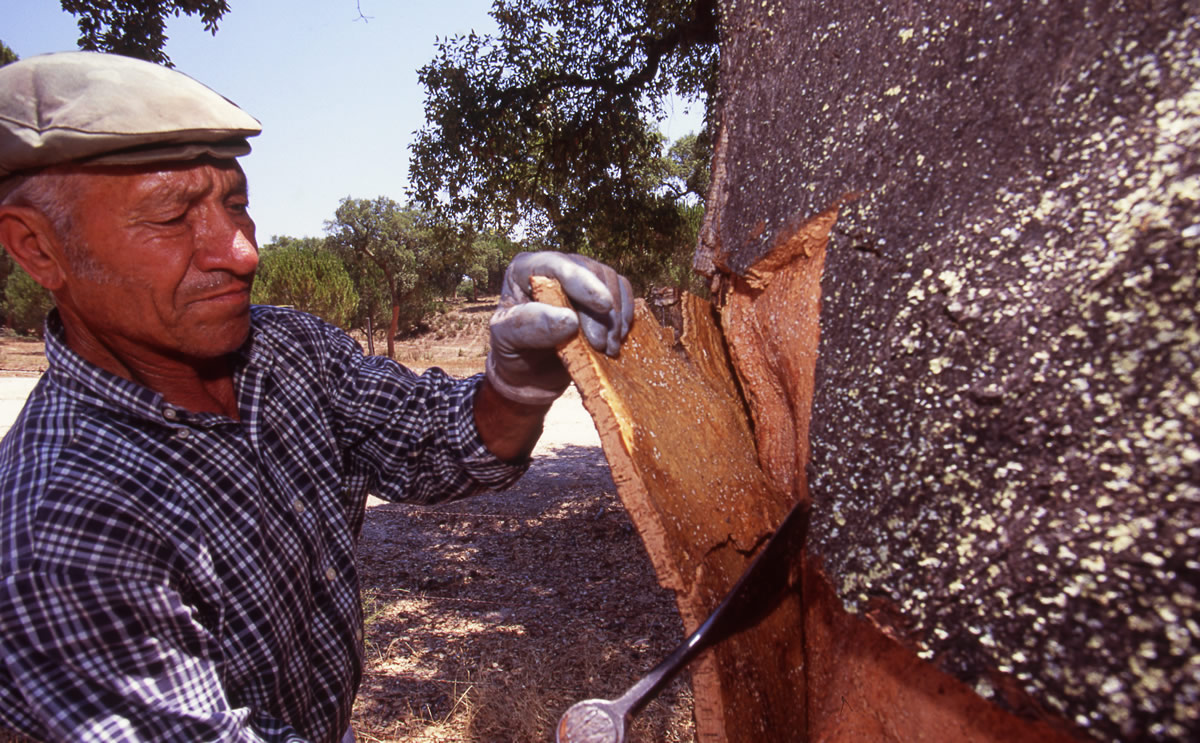 ‘There you go!’ If António and Carlos were satisfied at finally having finished, they were delighted at the look of wonder on my face. ‘This is fantastic. Thank you so much. How much do I owe you?’ António and Carlos looked at each other a little quizzically, then looked back at me again and laughed. ‘You’re our neighbour. You would do the same for us. Just remember to make the beds and get it planted up soon. The moon is coming around.’

And without another word, they unharnessed the oxen and began up the hill towards their farmhouse. Then António stopped, and turned around. ‘So, you’re having your cork stripped tomorrow?’

‘I don’t know. They did say they would be coming around now,’ I called back. ‘No, they’re coming tomorrow. They said so in the village. They’re finishing the hill up along the valley today. Tomorrow at dawn.’ António turned again and continued to walk up his hill. Since moving in, I was getting used to being the last to know about my personal affairs. And to early morning starts.

But this time, at least, I was going to be ready for them.