The breathtaking spring of the Alentejo, as the rainy season filters into the warmth of the coming summer, had arrived. It is the time of year when every conceivable colour that nature has to offer seems to scream it’s loudest to be heard before being silenced once again by the summer drought.

The prickled fruits of the strawberry tree glow a fiery orange red. The huge white flowers of the gum cistuses open to reveal their egg-yolk centres. The purple of the lavender bushes wave in temptation in the cool breeze. The burgundy lilac Judas trees compete ostentatiously for attention with the bunches of golden yellow flowers hanging from the glossy green branches of acacia trees lining the country roads. The meadows erupt with vipers’ bugloss and cowslips, and heather and gorse rub shoulder to shoulder in the forests. 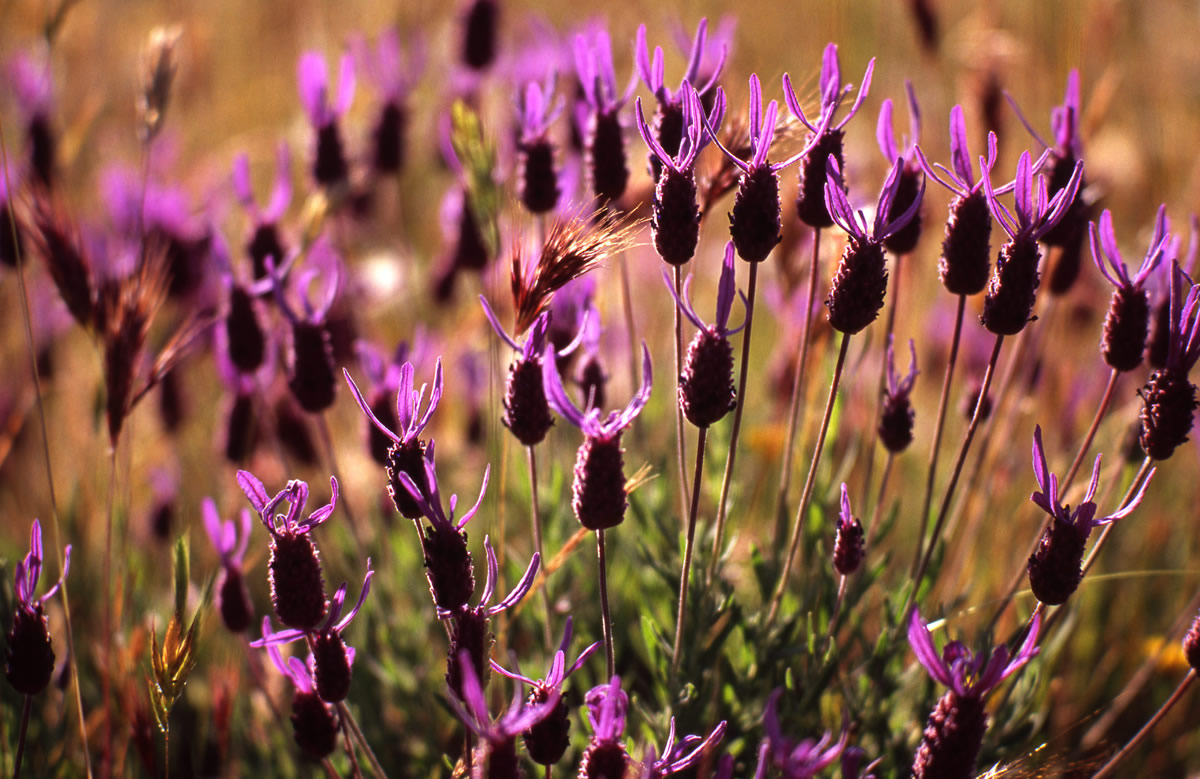 It is also the time when the region’s houses are vigorously whitewashed, as if not to be shamed by the vibrant splendour of their setting, and Siobhan was getting down to the task with appropriate industriousness. I watched as she poured the chips of slaked lime into a large clay pot, added some water, and then stood back for effect. Seconds later the show began. The pot began to tremble slightly, as the mixture began to bubble and boil. Then a cloud of steam shot up.

‘That would make a great party trick,’ I ventured. ‘We could tell people this was a traditional way of invoking the ancient spirits to guard our house against evil or something.’

Siobhan looked at me with a withering stare.

‘If you have quite finished thinking of ways to scare our friends away, I’ve got work to do.’

Having felt the outside of the pot to check the mixture had cooled, she picked up what looked like a huge scrubbing brush with a handle and set to work slowly relining the thick rammed earth walls. As the watery mixture dried, it hardened into a thick, chalky white coat, protecting the walls from the fierce summer sun that was to come as well as the rains in the autumn and winter months.

I wandered into the small vegetable garden we had created outside the front of the house. It was tucked inside a dry stone wall which shielded it from cold northerly winds. We had made a number of raised beds using old and broken roof tiles that we had replaced, filling them with the well-rotted manure we had rescued from the older stone cottage at the bottom of the hill where the previous owner had kept his donkey in his later years.

What had felt like backbreaking work, as we had filled seemingly endless wheelbarrow loads that then had to be pushed up the unforgiving steep hill, now looked like time and sweat well spent as healthy tomato plant bushes surged above the mulched surface in what we knew to be poor, thin soils.

‘It’s looking good, isn’t it?’ said Siobhan, who had put down her brush to join me in the garden.

‘Even our neighbours approved when they came round yesterday whilst you were out. They left some coriander seeds for us to sow. They said the moon was coming round.’

We had learnt to follow our neighbours’ advice about planting times and methods to the letter. However unusual it may have sounded, they were always right – as our efforts when we had done things our own way only served to highlight.

‘Now seems to be a good time to try out our new pump in the garden, don’t you think?’ I suggested.

We had just installed a brand new solar powered pump in our spring in the valley the previous weekend. Already it had proved to be the single best investment we had made, not least because of the admiring looks we had received from the neighbours as I had flicked a switch behind the kitchen door and seconds later water had poured from the pipe I had laid through the forest.

I still bore the marks of the painful scratches as I had pulled 250 metres of plastic pipe through the thick brush, but this had been more than compensated for by the reactions of Antonio and Maria who – like most of our elderly neighbours – still brought their drinking water every day up the hill from the valley in pots loaded onto mules and donkeys.

It was time to go and pick up post. Here in these hills, there were no deliveries to the door, and mail was left in one of the cafes in the village. As I drove along the new road to the village, I noticed that there was a stork’s nest on every single one of the telegraph poles that lined the way. In each nest, a proud mother was feeding a hungry chick. I spotted a couple of buzzards on the lines between the poles, whilst next to the river that ran below a grey heron picked its way carefully among the reeds.

The village was abuzz with talk. A cork buyer was in the area offering good money for cork and looking for expert strippers to work for him. This was the time of year the community came alive and good money could be made, more than supplementing the often meagre wages earned from other farm work.

Sure enough, when I got home a pair of men greeted me on my driveway. They said they had heard from my neighbour that some of my trees were ready for stripping that year as the last cork had been taken there nine years previously. In accordance with government regulations, the bark cannot be harvested within nine years of the last harvest. The year of the last harvest was still there, painted in white at the base of the trees. 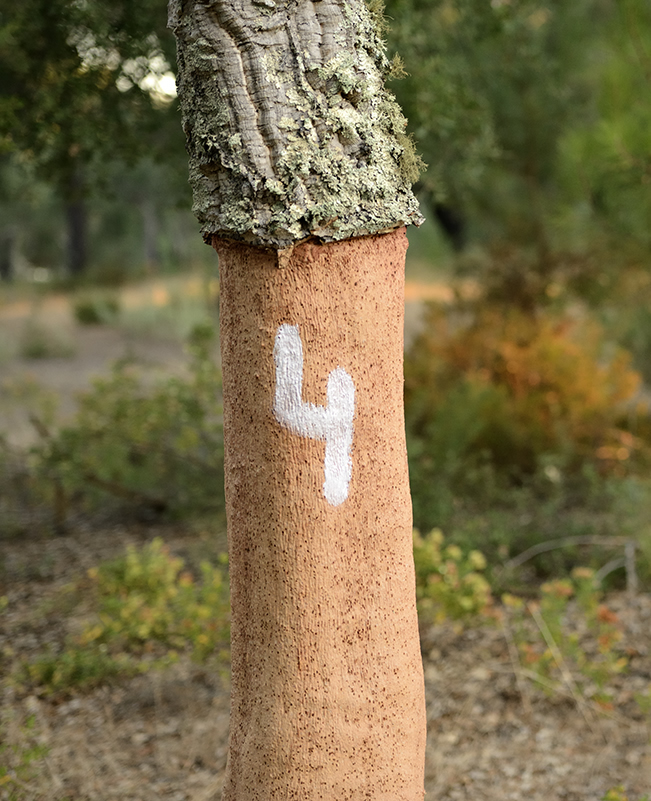 They had already agreed an advance deal with Antonio and Maria’s own forthcoming harvest, and wanted to have a look at our forest. I looked at them. They were an unlikely looking pair, a young Italian and an older slightly portly Alentejano. To add to the contrast, the latter had a mobile phone hooked onto his belt.

We walked down the path through the meadow at the bottom of the main olive grove that led into the woods. Our three acres of cork forest were awash with colour and scent, and rang with the hum of bees foraging for pollen amongst the abundant lavender and rock rose flowers. We left the path to go into the thick of the trees, climbing up and down the hill so that they could survey the individual trees to see how much cork could be harvested.

The young Italian was soon out of breath, but the older of the pair disappeared from sight as he energetically checked the age and ripeness of the trees, traceable only by the sound of rustling bushes and his occasional calls of ‘This one’s too young’ and ‘This one is a good one’.

Eventually he emerged. ‘About seventy ‘arrobas”, he said to the Italian.

‘OK, let’s talk prices,’ said the Italian, looking at me. We walked back up to the house and sat around the table on the terrace. It was time to negotiate. I had no idea what the going rate was, much less what an ‘arroba’ was, but they patiently explained the whole process to me, the different gradings of cork, how long it would take to strip the cork, how long it would be left to dry before weighing etc.

They also explained to me that the ‘arroba’ was the traditional measurement of weight introduced by the Moors. In modern terms, it was the equivalent of 15 kilograms.

‘Here’s a deposit. We’ll be back in a month to strip the cork, and we’ll pay the balance according to the total weight.’

I looked at the cheque. It was a handsome sum.

The pair got up to go. ‘By the way,’ said the younger man, turning to me.

‘Is that piece of land over there for sale?’ he asked, pointing at the next hill.

‘Yes, I think so,’ I replied. ‘I think I know who owns it. Are you interested in buying it?’ I asked.

The hill had been used to grow wheat, but had long been abandoned. Scrub had taken over the hilltop, while a few cork trees and strawberry trees had sprung up on the lower reaches.

‘I want to buy up somewhere like that and plant a new cork forest there for my grandchildren,’ he replied. I looked at him quizzically. He didn’t look old enough to be a grandfather. In fact, we were probably the same age. He turned around and caught my stare.

‘I’ve just become a father for the first time. Two months ago’, he laughed, and pulled a much-thumbed photograph of his baby son from his wallet.

We cooed over the picture. I was privately relieved – I had been worried that someone might buy the 25 acres of land in order to bulldoze a new eucalyptus plantation into the hillside. Logging companies were constantly on the lookout for new areas in the region to lease in order to supply the ever increasing demand for paper pulp from northern European businesses.

The invasion of these alien monocultures had brought a plague of forest fires to the region, and had so depleted the water table that wells, springs and even streams had dried up. To add insult to injury, the winter rains had then washed away what remained of the soil’s fertility.

‘My father, my grandfather, and my great-grandfather have all been involved with cork,’ he explained. ‘My family have always supplied the Italian winemakers. Besides, planting trees is the most important thing a man can do in his life.’

He winked, putting the photo back in the wallet and wiped away a tear. ‘Alongside having children, of course.’

Chronicle 5: The coming of the cork cutters (cont.)